Last year, not long after our return in Italy from Madrid, one of our closest friends moved back to her hometown as well. Lucia, whom we met in our mutual adoptive Spanish city, comes from one of the best places on earth: Sicily. The island has it all: sunny days, transparent and warm sea, incredible nature, historical sites, gorgeous food and great people!

So of course we had to visit! We organized a road trip, since we wanted to see as much as possible but be independent. Sicily is huge and we had only a six full-day holiday so we had to limit our trip to the western side of the island.

We flew into Palermo Falcone Borsellino airport from Treviso with a really cheap Ryanair flight. We got there in the evening and since we were staying in the city for two nights we opted not to rent a car immediately. Instead we took Line A of the metropolitan train (a sort of tube) from Punta Raisi up to Palazzo Reale-Orleans. We were staying at Palazzo Reale bed&breakfast: the owners are great and the position is perfect to discover the central area of Palermo. The first thing we did that night was trying the local street food: pani ca meusa and panelle at ‘Nni Franco U’ Vastiddaru (Panineria e Focacceria, Via Vittorio Emanuele 102). The first is a soft bread with veal’s lung and spleen and the second is a sort of crepes made of chickpeas flour.

We woke up early and tried to make the most of our day wandering in the streets of the city. We first walked on the main avenues to see the most important monuments, such as the Palazzo Reale, the Cathedral, the Teatro Massimo and the Teatro Politeama Garibaldi.  We then entered the surrounding areas and discovered the three city markets: Ballarò, Capo and Vucciria. They are a fascinating mix of colors, smells, sounds and ordinary street life. We had a quick sandwich for lunch while enjoying the view from the Terrazza Mare. In the afternoon we took a bus from Corso Calatafimi to Monreale. Not far south of Palermo, this is a small town famous for its Cathedral, symbol of the Norman architecture. The best part though was seeing from the hilltop of Monreale the city of Palermo and the surrounding hills, and the deep blue of the Mediterranean Sea. At night, after dinner in one of the many restaurants and bars in the area of Piazza Marina, we had a drink in a little square that we found by chance between Via Montevergini and Via San Biagio: it was full of people having good-looking cocktails so we had to try one! 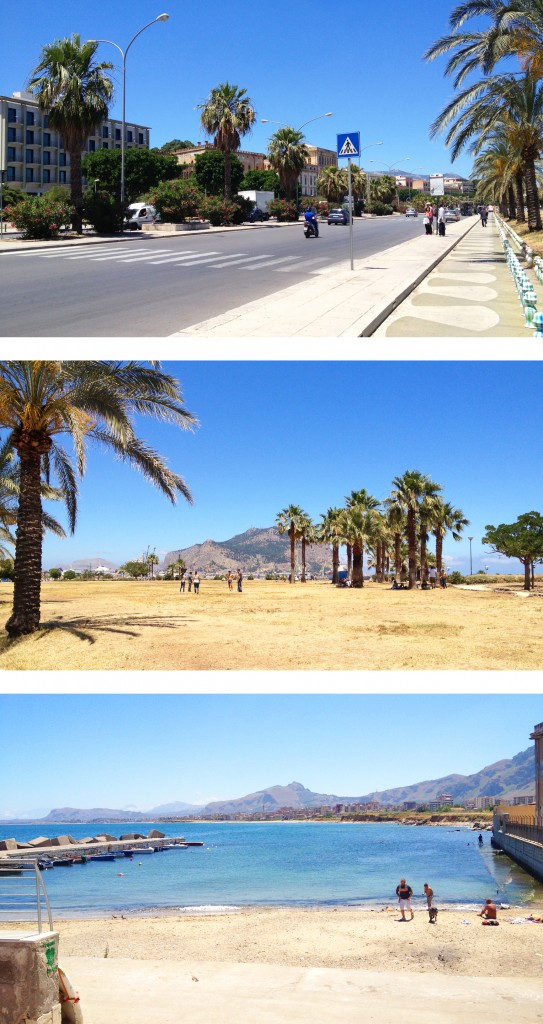 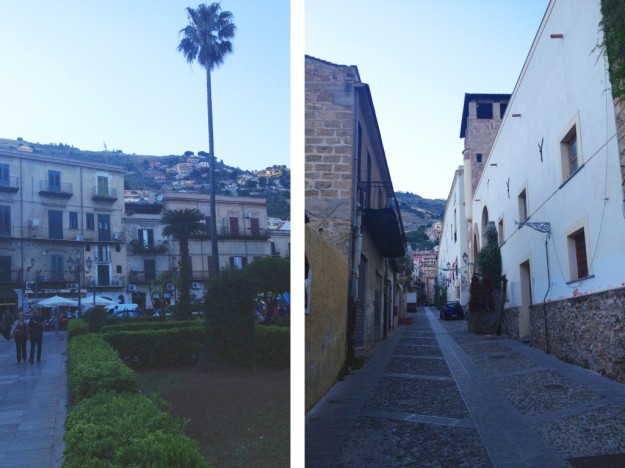 Our rented car arrived at the bed&breakfast (www.noloinrentalcar.com) and we were ready to leave the city and discover the true nature of Sicily. We had a GPS luckily, but driving in the crowded streets of Palermo was a bit scary, even for me, even if, as an Italian, I am quite used to crazy drivers. But we made it and I actually adapted myself quickly and had fun. We exited Palermo towards north-west and followed the coastal highway until Castellamare del Golfo. From there we took a winding way up to San Vito Lo Capo. We got there mid morning so we walked through this little but highly touristic town and we quickly left. On the way we stopped to enjoy the view from an old lighthouse between fields burnt by the sun and rocky cliffs on the sea. We followed a winding and narrow road that led us to the northern entrance of the Riserva Naturale dello Zingaro, a natural reserve full of tiny bays and cliffs, rare and endemic plants and fauna. The reserve stretches along 7 km and many visitors hike all the way. We just decided to walk a bit and find the perfect spot for lying in the sun, having a little swim and just wishing to never leave. After few hours we decided to leave, since we had to find a place for the night. We opted to go a bit south, towards Trapani. We stopped at the tiny village of the Bonagia with its tonnara (ancient port buildings were fished tunas were trapped and then killed for commercialization) and then reached Pizzolungo. Here we stayed in the simple but clean Erice Mare bed&breakfast, that we found by chance while driving by. 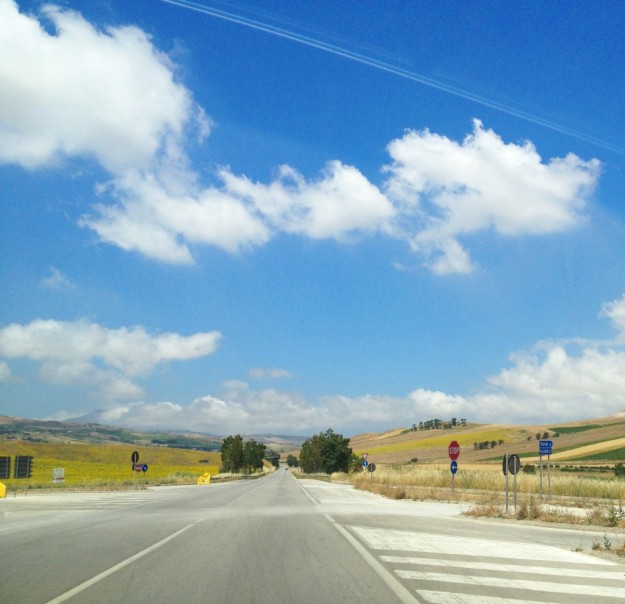 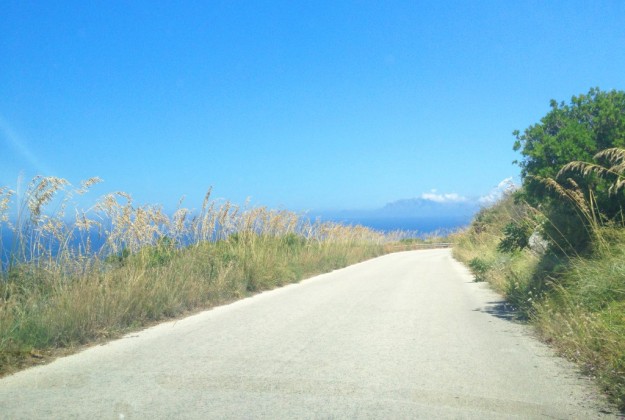 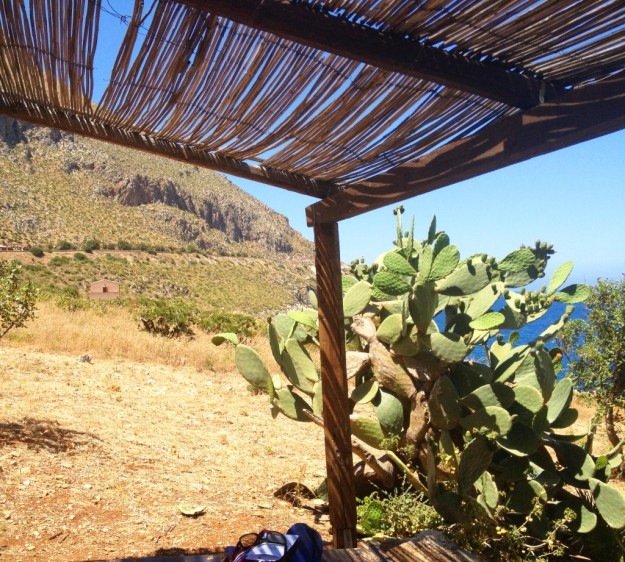 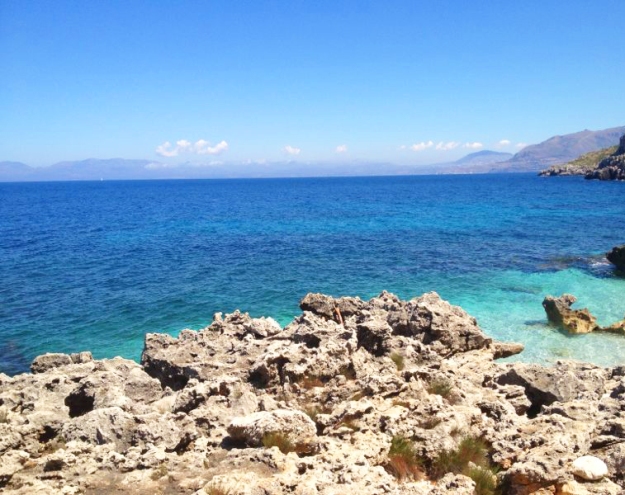 After a nice breakfast with fresh fruit just picked from the backdoor garden, we left for Erice, one of the most breathtaking places in Italy. It is a small medieval village placed at the top of a mountain from which you have a 360º view of the valleys and the sea all around. We enjoyed a nice stroll through the tiny alleys of stones lulled by the fresh winds of the mountains. We left Erice and headed to Trapani, a nice and lively city. We didn’t really want to spend the day in the city, so we just walked a bit in the old historical centre, without a precise goal or specific buildings to see. We got to the central pedestrian area and from there we reached the tip of the port. We soon jumped back on the car and drove south. We stopped to have a picnic late lunch at the saline that spread along the coast from Trapani to Marsala. We then followed our journey and along the coast we passed by Marsala, Mazara del Vallo, Sciacca and then in Agrigento we entered the island in order to reach in the afternoon our friend Lucia in her hometown, Canicattì. 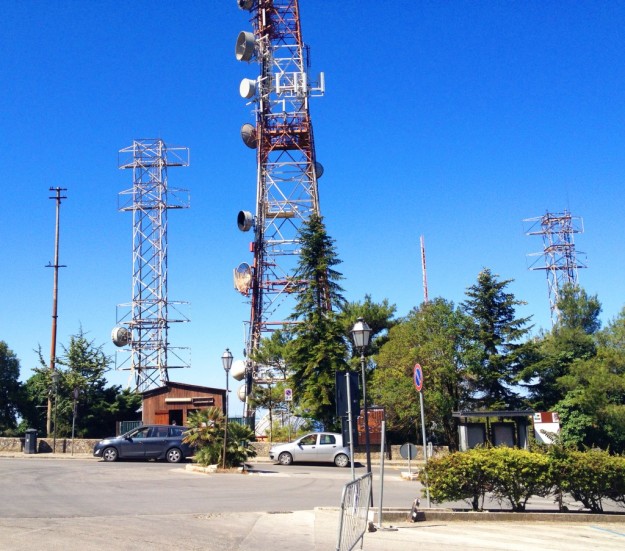 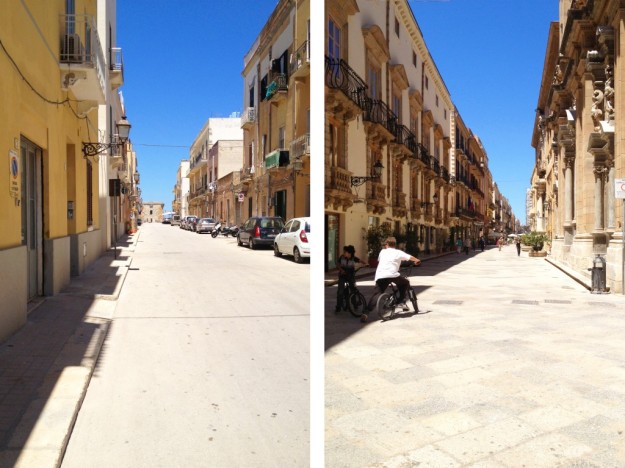 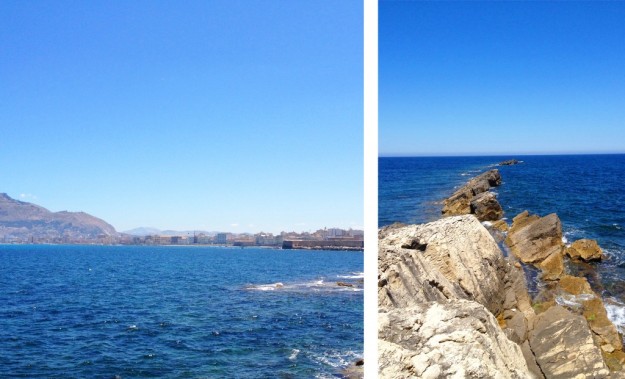 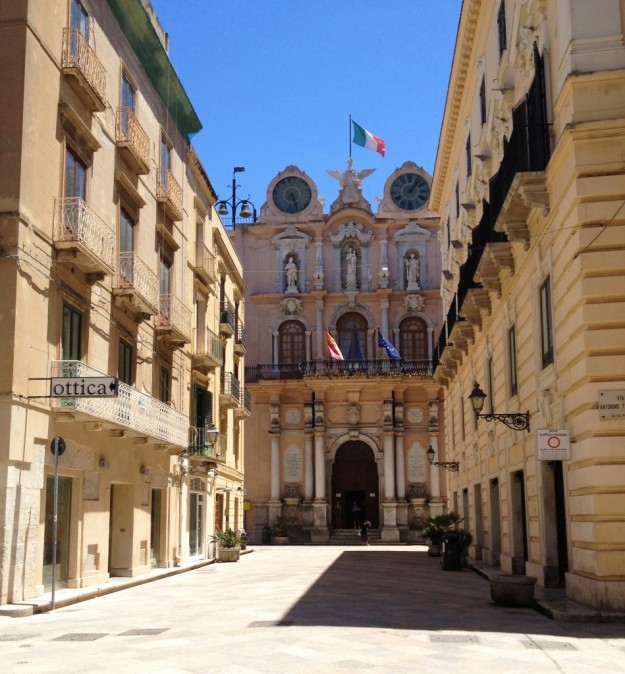 Staying at our friend’s we took things a bit more slowly. We wanted to spend time with Lucia and with her great family, relax and enjoy real Sicilian life. On the first day she took us to Licata, a town on the southern coast, not far from Agrigento. We spent the day at the beach with her and some friends, eating an amazing and incredibly cheap sandwich bought in Canicattì before leaving in the morning at Gino Panino). At night after a dinner in a typical restaurant in the countryside, a friend of Lucia took us in a tortuous tour in the old part of Canicattì. It was totally unplanned and unexpected (that’s why we don’t have pictures), and totally worth it! On the next day we had the best brioche con la granita, a sweet bread with gorgeous ice-cream. We later went to visit the countryside around the city and later headed to Agrigento to visit the famous Valle dei Templi (adults 10€). This Unesco world heritage archaeological site is a huge and amazing complex of temples and walls of the ancient Greek city of Akragas. We were there in late afternoon with the sun right beyond the buildings, creating a great effect of shadows and lights with the reflections on the stones. After the visit we went on the seaside of Agrigento and enjoyed the sunset in a nice cocktail bar on the beach. 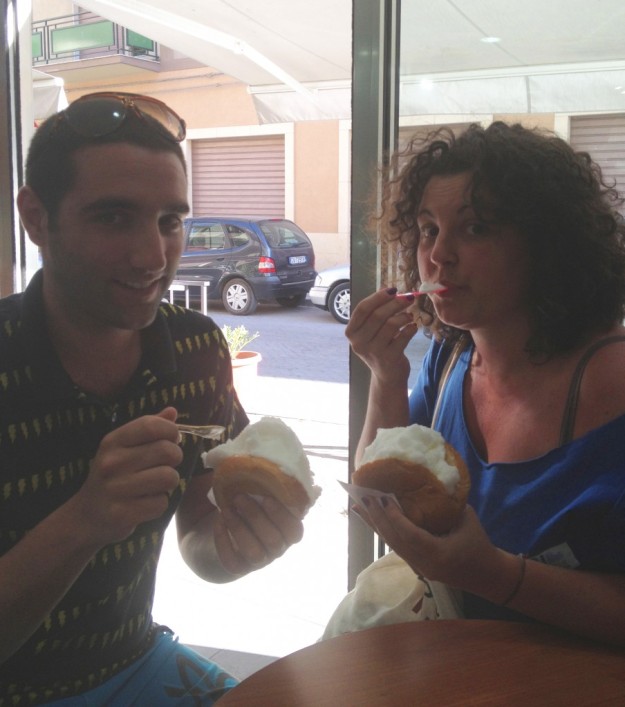 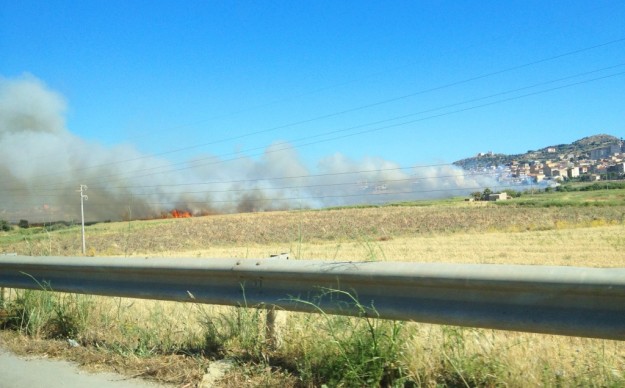 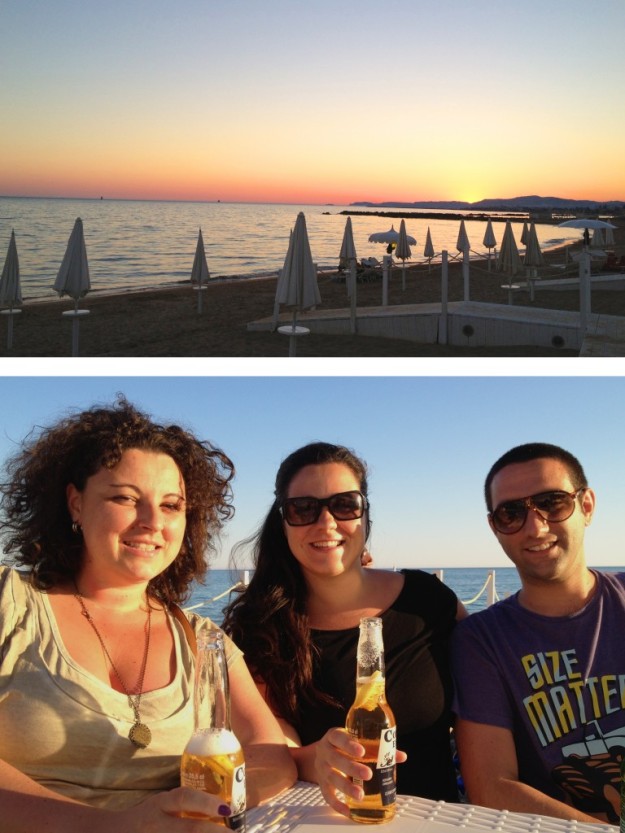 On our last day we left Lucia and Canicattì in the morning and headed back to the west. We passed Agrigento and Sciacca, and from there, through a beautiful road between vineyards and olive fields we reached Selinunte, another archeological site (adults 6€). The ruins are in much worse conditions than the ones of the Valle dei Templi, but the position is incredible. Our last view of the landscape before heading back to the airport was amazing. Standing next to the building constructed on a cliff of burning sand, grey stones and deep green cactus, facing a thousand-shades-of-blue sea was the perfect goodbye to this magical island. 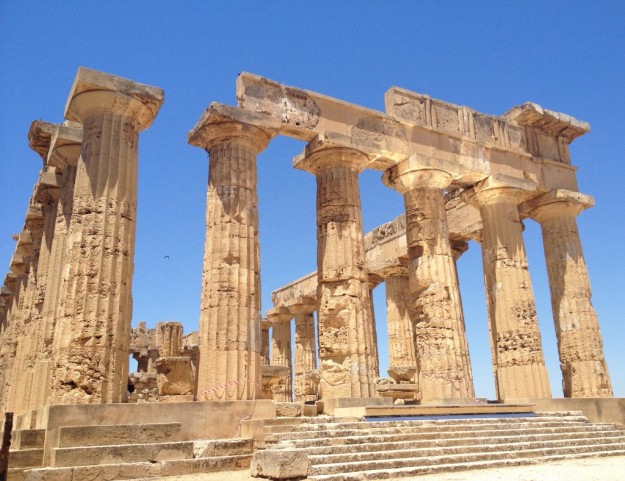 P.s: Sicily, like many other places, is not perfect and has its problems. It is one of the regions with higher unemployment rate. It is one of the main European “gates” for illegal immigration from Africa. It has a deep and rooted diffusion and establishment of the mob. So when visiting this beautiful land one should not forget these aspects: I believe that relating to them and understanding their interaction with the society is the best way of creating a true connection with the people.

1 thought on “A bite of Sicily”

We're Stefania and Matteo. On Sealinthefog.com we share our passion for #diy #food #travels. Check our About Us page to know a bit more. We hope you enjoy it!